In Passion and Glory, the concluding volume, the reader witnesses the great dramas of the composer’s last years. This is the era of the ‘Battle’ Symphony, the Seventh, and the ‘Ode To Joy’, of monumental pieces composed in solitude and performed with ferocious energy.

After his love for his ‘Eternally Beloved’ is consigned to the past, we witness Beethoven’s return to Vienna in 1812, a period of glorious creativity amid a city celebrating the defeat of Napoleon. But we also see a genius, divinely blessed, being unjustly punished as disease ravages Ludwig’s body and he becomes increasingly deaf.

Through a vivid narrative culminating in the remarkable moment of his death on 26 March 1827, the ‘raging at the fates’ epiphany, John Suchet invests Beethoven with a tragic grandeur missing from conventional biographies and brings to stunning life the extraordinary story of the Last Master’s personal anguish and artistic triumph.

John’s trilogy The Last Master, a three-part biographical novel of Beethoven, was published to great acclaim in the late 1990’s.

This is one of three books, written as a series of novels but sticking scrupulously to the known facts. They bring Beethoven’s personality to life, set against the turbulent backdrop of the Napoleonic Wars. 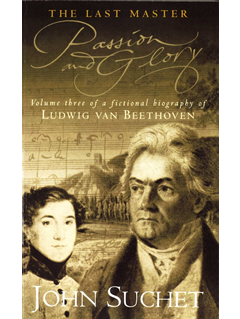