The Last Master is a magnificent fictional biography of Ludwig van Beethoven, arguably the greatest composer of all time.

Beginning before his birth and ending with the famous Heiligenstadt Testament of 1802, Beethoven’s acknowledgement that his deafness was incurable, the opening volume follows the prodigy as he emerges from the shadow of his father’s thwarted ambitions to cultivate his own unique place in the musical life of Vienna, Europe’s musical capital but a city caught up in the war against Napoleon.

John Suchet brilliantly re-creates the defining experiences on Beethoven’s path to greatness. His first public performance at the age of seven; how he dazzled Mozart on their one and only meeting; his father’s descent into alcoholism and his mother’s tragic early death; and, as if mourning a brother, the devastation Mozart’s death effected on the 22-year-old Beethoven’s personality and developing musical vision.

John’s trilogy The Last Master, a three-part biographical novel of Beethoven, was published to great acclaim in the late 1990’s.

The three books, written as a series of novels but sticking scrupulously to the known facts, bring Beethoven’s personality to life, set against the turbulent backdrop of the Napoleonic Wars. 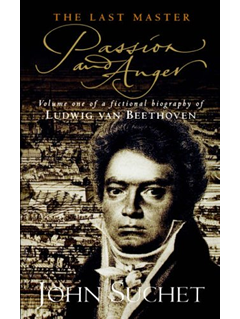